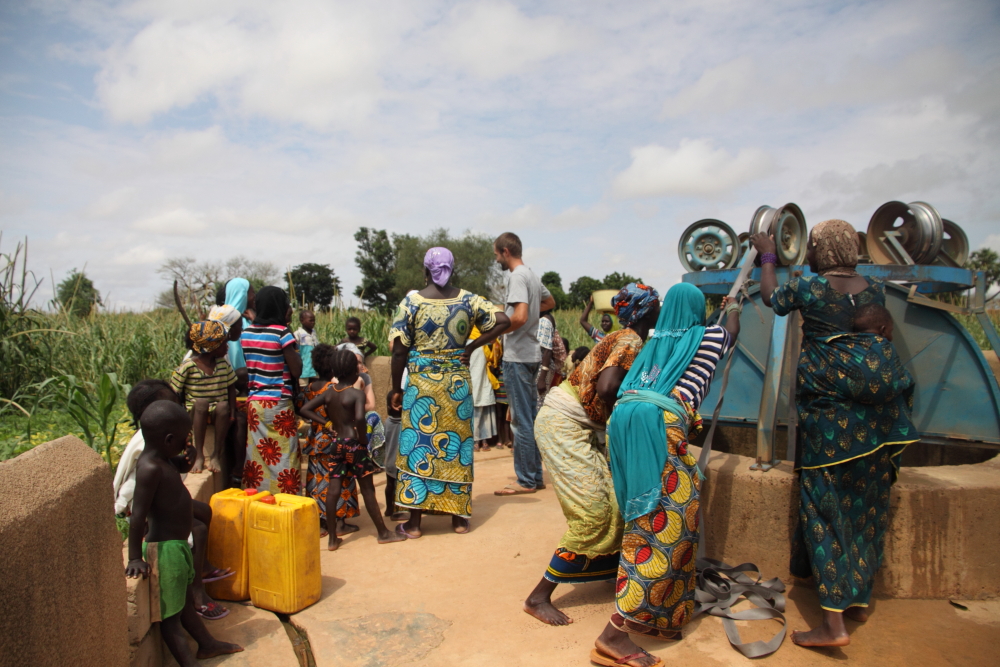 the samaritan woman at the well. you probably know the story, but we’re going to take a look at it today, because once again the Lord has opened my eyes to some truth via historical context :o) my favorite.

now when Jesus learned that the pharisees had heard that Jesus was making and baptizing more disciples that John (although Jesus himself did not baptize, but only His discples), He left Judea and departed again for Galilee. and He had to pass through Samaria. so He came to a town of Samaria called Sychar, near the field that Jacob had given to his son Joseph. Jacob’s well was there; so Jesus, wearied as He was from His journey, was sitting beside the well. it was about the sixth hour.

first, Jesus’ journey to Galilee. i was talking with a friend of mine here, a seminary student, about this story. he told me that the path Jesus took to Galilee was atypical of a Jew at that time. many Jews walked around Samaria to get to Galilee, so as not to associate with the Samaritans. Jesus, on the other hand, “had to” pass through Samaria. He took the direct route.

“a woman from Samaria came to draw water. Jesus said to her, “give me a drink.” (for His disciples had gone away into the city to buy food.) the Samaritan woman said to Him, “how is it that you, a Jew, ask for a drink from me, a woman of Samaria?” (for Jews have no dealings with Samaritans.) Jesus answered her, “if you knew the gift of God, and who it is that is saying to you ‘give me a drink,’ you would have asked Him, and He would have given you living water.”

everything  Jesus does hereafter is not only atypical of the times and standards, but proof that He is no ordinary man. Jesus stopped at the well and started speaking to a woman. and He didn’t stop at just any well, He stopped at Jacob’s well. and asked the solitary woman there for a drink. that may seem like nothing when you think about Jesus, because He was always doing radical things like eating and reclining with sinners. but let’s think about what is extraordinary here.

when i told you about women gathering water at the well here in Niger, i mentioned that they rarely do it alone. in the photo above, you can see a group of 3 women hauling one bucket of water up from the well. that particular well is 80+ ft deep. the well is a gathering place. it’s a place of laughter, sharing stories, but most of all it’s a place where women work together to gather their most important physical need: water.

back to John 4. we are not told that there are any other people present at this well. it’s just Jesus and this woman who approaches to draw her water. one woman. and Jesus, a Jew, has just asked her, a Samaritan, to draw water for Him. and Jesus tells her if she knew who He was, she would know that He offers living water. now, let’s keep reading.

the woman said to Him, ” sir, you have nothing to draw water with, and the well is deep. where do you get that living water? are you greater than our father Jacob? he gave us the well and drank from it himself, as did his sons and his livestock.” Jesus said to her, “everyone who drinks of this water will be thirsty again, but whoever drinks of the water that I will give him will never be thirsty again. the water that I will give him will become in him a spring of water welling up to eternal life.” the woman said to Him, “sir, give me this water so that i will not be thirsty or have to come here to draw water.”

and now, for this first time reading this passage, i see something different than before. i always read this thinking the woman truly wanted the Living Water Jesus was talking about. but now, in the context of understanding what it truly looks and feels like to draw water from a deep well, i think i understand what she was really saying.

i don’t think this woman has truly understood who Jesus is yet. what if she is only thinking of her current physical situation? Jesus just offered her a chance not to draw water from the well anymore. that’s what she focused on in her response. she did not crave understanding of this “Living Water,” she wanted relief from the daily physical labor of drawing water from the well. she did not want to be thirsty anymore, she didn’t want to have need of returning daily to that well to draw water. we don’t know how long her trip to the well was. we don’t know how far she walked daily. we don’t know if she pulled water on her own every day. we only know she was grasping at the chance to change her plight.

pulling water is hard work. april and i did it by ourselves at the well pictured above. we had to be taught the proper rhythm. we alternated pulling, one pulling with all our strength from the top of the rope, the other crouched down from her previous pull, repeating motion after motion until the bucket rose to the top. after 2 buckets drawn, we felt the harshness of the work in our arms, realizing muscles that had never seen that type of toil. we talked later about what it would have been like to pull the bucket by ourselves. and our thoughts were drawn to this Samaritan woman immediately. we knew the struggle of two of us pulling water and it became clear why this woman would ask Jesus for the ability to have water abundantly, without the long walk to the well and the labor that she would feel in her arms long after her jar had been raised. 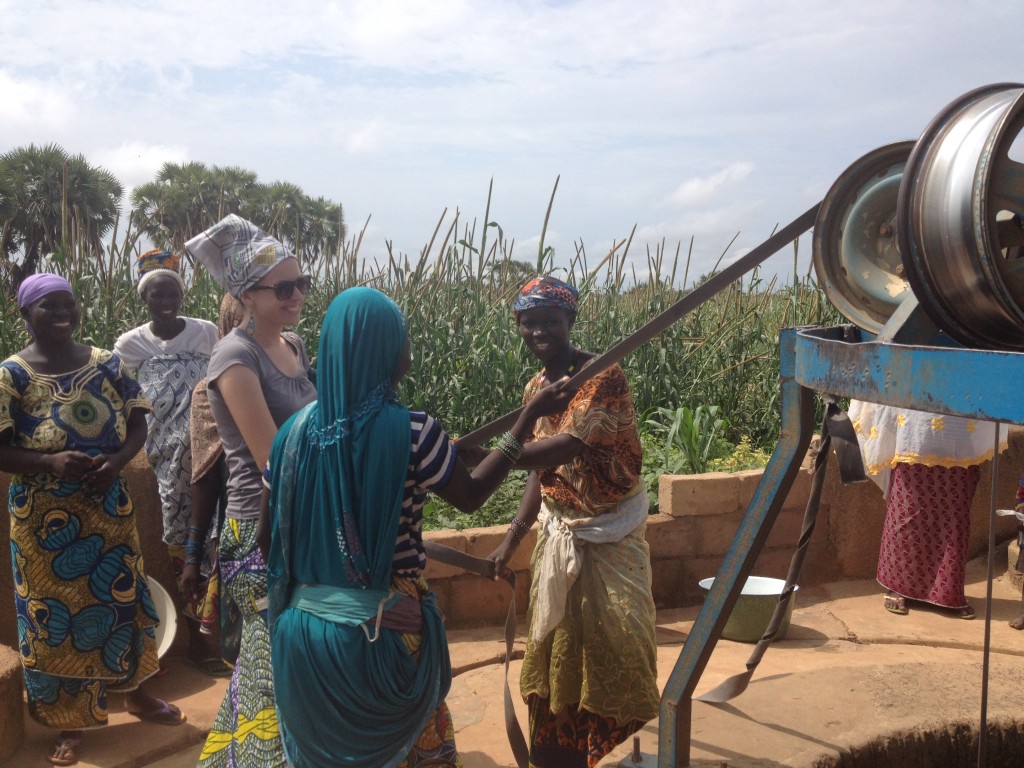 we won’t finish this story yet. i want to wait here, in this thought: Jesus was offering this woman the chance to know Him. she responded by asking Him to give her water to save her from hard work.

when Jesus offers Himself to us, do we get stuck on the things He can do for us, how He can alter our physical situations, or do we truly understand that His offering simply of Himself is enough? do i seek Him alone, or do i seek what He can give me, how He can answer me the way i want Him to… can i simply hear the Word He gives and know that that Word is simply enough… 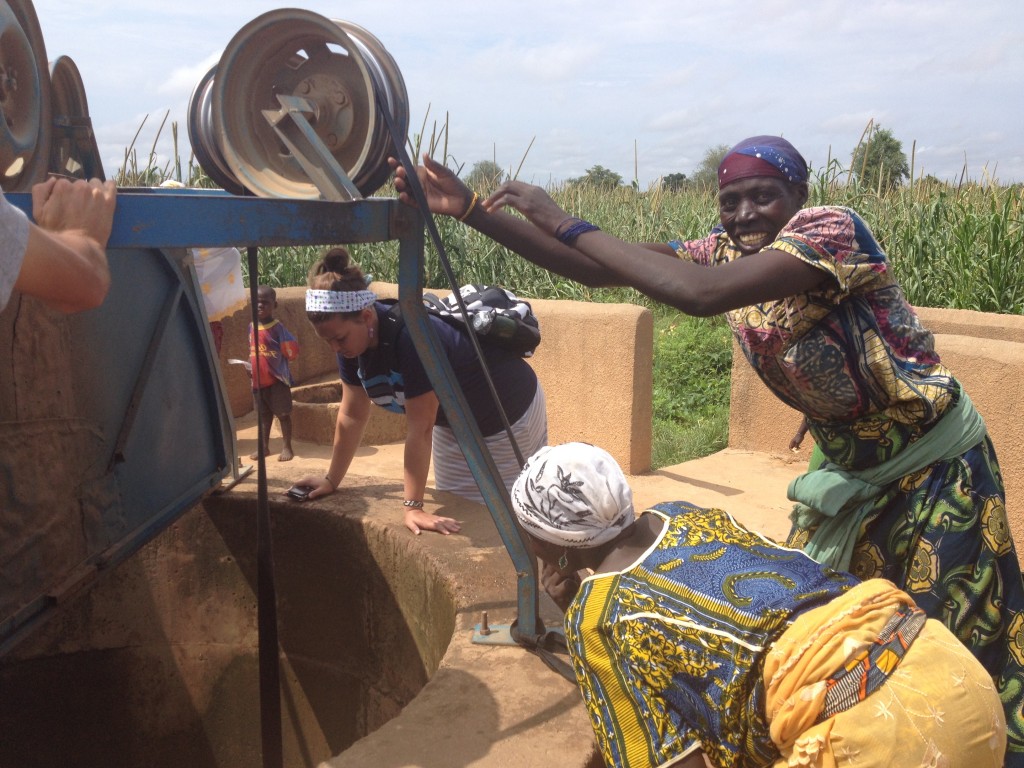 (Jesus paid it all)